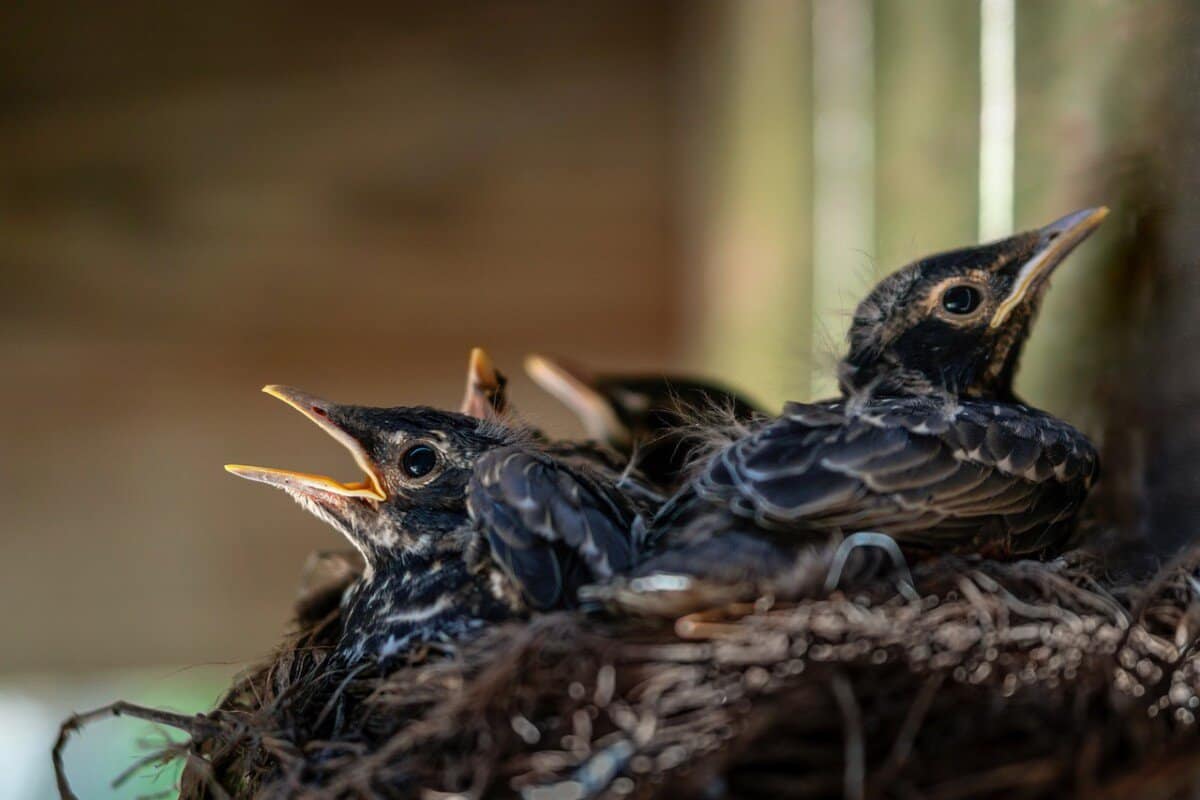 Maybe you’ve seen baby birds around your area and can’t help but wonder this: “do all baby birds survive in their nests?”. For the longest time, I couldn’t find any answers, so I did my own research to find my own! Here’s what I found:

It definitely is sad to know that many baby birds do not make it to adulthood. If you read on, I’ll share more details of which period of nesting the baby birds seem to die off, and some reasons why some species have a lower survival rate than others. Read on!

I’ll admit it: I am a naturally curious guy and birds intrigue me!

One day, I wondered: “do all baby birds survive?” Given that there always seem to be predators around and nests are always exposed to the outdoors, what is a good estimate of baby bird survival rates?

I wanted to find it out for myself!

While looking for resources online, I found some data available on Project NestWatch collected by voluntary participants about the nesting success and survival rates of baby birds!

Here’s an INTERACTIVE graphing tool you can use to look at the data:

Below, you can also have a look and mouse over to observe the comparison of overall nesting survival rates of common birds.

The egg survival rate represents the percentage of eggs laid make it to nestlings.

Confused? Here’s an illustration to help you understand the metrics:

Interestingly, when we look deeper at the egg survival rates and nestling survival rates, we can see that nestlings (75.1%) survive only slightly better than eggs (71.8%).

However, this makes a lot of sense given that eggs are less likely to survive than nestlings because they need to be constantly incubated if not they would not hatch at all.

You might be thinking: “Wait, why is the overall nesting survival rate much lower than the other 2 survival rates?”

The egg survival rate represents the percentage of eggs that successfully become nestlings.

The average egg survival rate of birds is 71.8%, but most fall within the range of 65.4% – 83.5%, depending on the bird species and other conditions such as nest location and the presence of predators.

The nestling survival rate represents the percentage of nestlings that successfully become fledglings.

The average nestling survival rate of birds is 75.1%, but most fall within the range of 68.8% – 91.9%, depending on the bird species and other conditions such as nest location and the presence of predators.

When looking through the data, I noticed that some birds have a lot higher nesting survival rate than others.

Here’s a table of some examples of common birds:

From the table above, we can clearly see that some birds have a much lower survival rate than others.

This can be affected by certain factors which cause baby bird deaths, which I will go through in more detail later!

In a study of different regions and climates, scientists discovered that the survival rates of baby birds also vary accordingly. [2]

Here’s what I found and summarized in their studies:

Do Baby Birds Die In Their Nests?

You’ve seen the survival rates of baby birds and the stark difference between some common birds. The question now is: Do baby birds die in their nests?

Here’s a video showing how birds react to baby birds dying in their nest. It’s a sad but rare recording:

Why Do Baby Birds Die In Their Nests?

During extreme weather conditions such as storms, nests that are improperly built and secured will be shaken by the winds and rain.

Baby birds or eggs in these nests can either die by falling out of the nests or the whole nest may fall from the tree altogether.

Most of the time, these nests are built by inexperienced bird parents which will later learn to build more stable nests to withstand stormy days.

Baby birds can die from dehydration and starvation if parent birds do not feed their young enough.

If the hatch timings of the eggs in the clutch are not the same, some baby birds will grow faster than the others, attracting more attention from their parents to get fed more and grow faster.

Those that hatch later will grow slower and if the nutrition isn’t enough, they will eventually die of dehydration or starvation.

Baby birds do not drink directly from any water sources, but rather they receive their water indirectly from food sources brought by their parents such as live insects.

They require sufficient water in their diet in order to survive. Otherwise, they will die from dehydration.

If somehow, parent birds are not able to hunt effectively and feed their young, they will also die from dehydration or starvation.

When a baby bird suffers from any of these diseases, it will most likely spread within the nest and kill off others too. This happens naturally and there is nothing we can do about it.

It is up to the parent birds to make sure the nest is clean and disease-free by removing the baby birds’ fecal sacs efficiently.

Eggs and nestlings can freeze and die when they are not incubated enough by their parents.

Birds need to sit on their eggs or nestlings and expose their brood patch to them to give them the warmth that they need.

In a climate where the heat is overbearing, excessively incubating eggs or leaving the nest in an area with lots of sun can cause their eggs to overheat and not hatch.

In fact, due to global climate change, birds have begun to nest earlier and earlier to avoid the heat.

Scientists have discovered that birds that nested at cooler ends of their range resulted in a higher nesting survival rate compared to the warmer edges! [1]

Have you heard of a brood parasite? If you haven’t, then here’s an explanation: Brood parasites are organisms that rely on other species to raise their young.

Examples of brood parasites are Cowbirds and Cuckoos.

These species secretly lay their eggs in the nests of unsuspecting birds because they have no brood patches for incubating their own young.

The foster parent then spends effort to raise the young, oblivious to the brood parasite eggs and nestlings in their nest!

What actually kills the eggs and nestlings in the nest is the competition. Brood parasites can hatch earlier than host eggs, grow faster than host nestlings, and even push host eggs out of the nest!

Here’s a video to clearly explain how they work. Watch all the way to the end!

After facing so much difficulty in growing up as baby birds, they still face the dangers of predation.

If nests are not well hidden or guarded, predators can come along and eat up all the eggs or nestlings in the nest.

Here are some examples of predators that can kill baby birds in the nest.

Here’s a video of how nest predation happens:

Among some larger bird species, there is a strong sense of sibling rivalry that is innate in baby birds.

Parent birds find it difficult to keep feeding more than one or two chicks due to the size that they can grow up to. So, baby bird siblings take it up to themselves to fight for survival.

These baby birds will bully, pressure, and eventually kill the weakest and youngest of the clutch in order to survive.

This is the cause of death that is necessary and common for the survival of baby birds.

Examples of such species are birds of prey and some other large birds such as cranes.

Here’s a video to demonstrate this intense phenomenon:

8. Competition With Other Bird Species

There can be lots of competition among the different bird species. Birds will purposefully attack the eggs and nestlings of other species for a nesting spot.

This can be seen especially in cavity-nesting birds, where the availability of natural cavities is scarce.

If parent birds are not around to defend their nests, their eggs and nestlings could easily be emptied out and killed.

Here’s a video illustrating how an owlet pair adapted and coped with other species fighting for their nesting spot:

Baby birds do die easily. On average, 44.7% of baby birds die in their nests. They are defenseless as eggs and nestlings while in their nest and they die easily due to extreme weather conditions, extreme temperatures, brood parasites, predation, and fierce competition from other bird species.

Will Mother Birds Remove Dead Babies From Their Nests?

Here’s a video of this happening in a nest box of Blue Tits:

Now we all know how hard baby birds fight to survive in this harsh natural world. Let’s all appreciate all the birds around us: the ones that fought hard to survive!

I hope this analysis and study have been useful and informative for you. Thanks to all participants who contributed to Project NestWatch and the collection of the data used in this article!

Thank you for reading and happy birding!