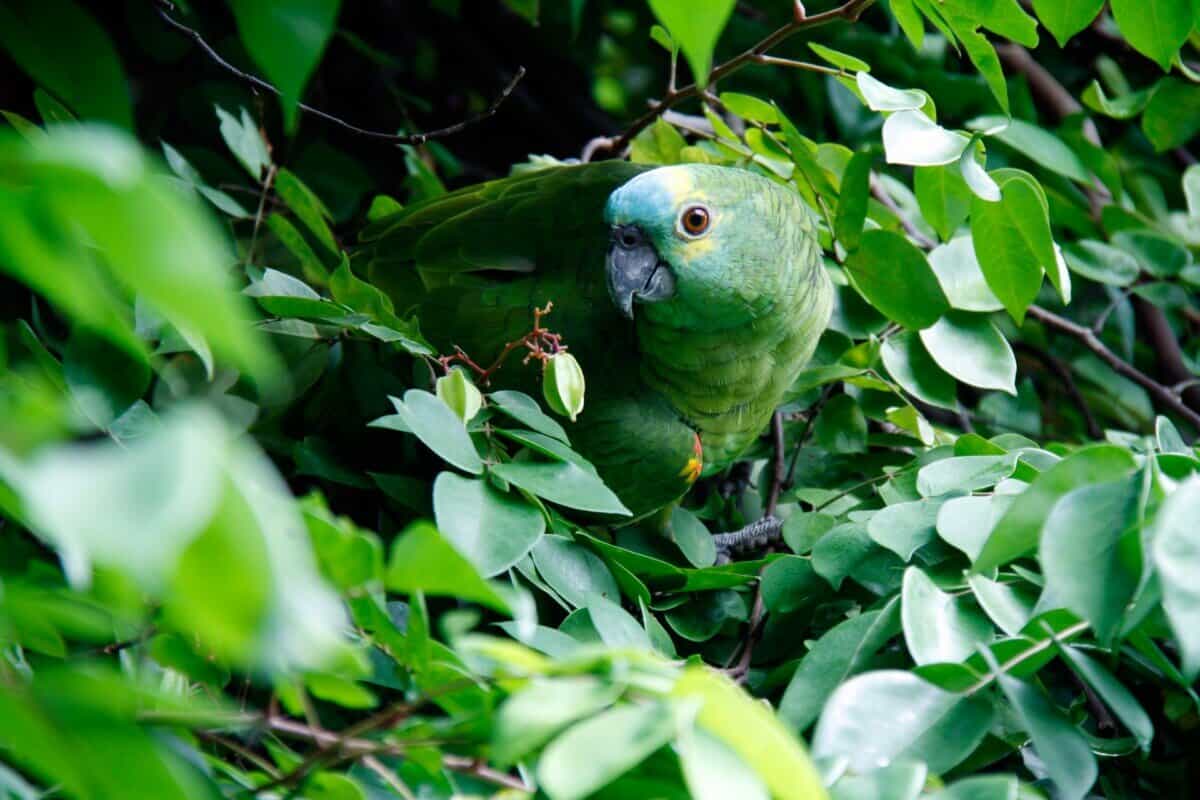 Birds are actually amazing and are so highly adapted to avoid their predators. Have you ever wondered how they actually do so? I was also curious about this issue and so I did some research online and wrote this article on my findings. Here’s what I found:

Most birds avoid predators using camouflage. However, birds also avoid their predators using secondary methods such as living near ‘protector’ species, using nest cover and concealment, their ability to retreat. Birds will try to avoid detection first before they attempt to make their escape if needed.

While it can be useful to know the strategies by which birds avoid their predators, I found it really interesting to find out more about them. Read on more to find out more if you’re curious!

The most natural way for birds to avoid any detection from their predators is to resort to their camouflage. There are two ways that they do so: (a) plumage camouflage and (b) egg camouflage. It makes sense that birds have to get this right or run a risk of sticking out like a sore thumb, attracting predators. Camouflage is used to reduce the number of resources that will need to be spent on escaping and devising other strategies to cope with predator detection.

Firstly, the birds will use their plumage to camouflage and blend in with the surroundings. If you’re a beginner birder and don’t know the terminology, plumage is actually the patterning and colors of a bird’s feathers. So a well-camouflaged plumage of a bird should help a bird blend into its surroundings well to avoid detection from its predators.

A great and extreme example of how plumage camouflage can be very effective is the plumage of a nightjar. If you’ve never heard of nightjars before, nightjars are birds that are typically nocturnal and tend to stay half-asleep during the day. While they are resting during the day, they usually have to sit still for long periods of time. While remaining still, they need to develop an effective defense mechanism against predators. This is done so by their incredibly hard-to-spot camouflaged plumage. Here’s a picture of a nightjar for illustration.

Did it take you a long time to locate the nightjar? Can you imagine if you were out in the woods, how much harder would it be able to spot if you were just passing by. In the same way, predators would not be able to spot it due to its effective camouflage pattern. In fact, I am making it to spot a lifer in my area, the Large-Tailed Nightjar, and have yet to do so because of this. I am always jealous of my friends who have easily spotted some sitting out in an open badminton court!

Nightjars are so well-loved within the birding community that some avid birders such as Dave Griffiths took to set up Project Nightjar where he developed games for the public to guess the locations of nightjars in pictures. Do check it out if you’re interested!

Bird camouflage is not confined to just their plumage, but this also extends to their eggs. Predation not only happens when the bird is fully grown but also before they even hatch. If eggs are conspicuous to predators, they are easy and sitting targets. As such, birds have developed different egg pigments. Egg pigments are substances that comprise complex molecules that are synthesized by the shell gland of a bird. The known two pigments are Protoporphyrin that is responsible for reddish-brown colors and Biliverdin that produces blue and greenish colors. These two pigments may or may not work in tandem to produce one shade with spots, a new color, or a combination of both. As such these egg pigments provide a variety of colors that help them blend into surrounding vegetation or nesting material.

What I’ve found recently is that scientists and ornithologists (bird scientists) are discovering a new mechanism of how birds are performing behavior-induced camouflage of their eggs. In the study, they investigated how Blue-Footed Boobies have begun smearing their eggs with dirt and mud in order to conceal their eggs from predators. Have a look at this diagram taken from their research paper:

From the diagram above, we can tell that the highest proportion of eggs lost is during the first 5 days after a booby egg has been hatched. In order to counter this predation, scientists have concluded from a series of experiments that the boobies started darkening their eggs during their incubation by transferring soil onto their eggshells from nest materials for camouflage. As a result of this behavior, the attack rate of predators on the boobies’ eggs has decreased by 20% overall.

Birds like any other animals and people, will want the best for their kids and achieve the best protection for their young and themselves. Some, have taken this to the extreme by choosing to reside near terrifying predators such as alligators.

In a curious case between storks/herons and American Alligators, an interesting relationship exists. Wading birds such as storks and herons have chosen to build their nests near the place where alligators hang out often despite knowing the dangers of these scary reptiles.

However, this relationship is counter-intuitive that both the storks and herons and the alligators benefit from this relationship! Alligators act as the “protector” species that defend the birds’ nests from predators such as snakes and opossums that may be gunning for their eggs with just their presence alone. What alligators stand to receive on their end would be food in the form of dropped chicks from nests due to brood reduction. Now before you panic about wading birds kicking chicks out of their nests to be eaten, please know that this is a common behavior in wading birds and is a natural process. In the Everglades, alligators face a harsh environment and are not fussy with settling for an easy chick carcass meal. Here’s an article where this is discussed in greater detail.

It actually makes a lot of sense for birds to conceal their nests. Nests are basically the equivalent of our homes to birds. Nests are places where parental birds bring up their young, from laying their first egg to feeding and developing their hatchlings. Throughout this entire process, known as the nesting period, the birds will be exposed to more predators because they would have to anchor themselves to a single spot. If a predator spots the nest easily, then all that effort will be for naught. Therefore, it is important that birds cover and conceal their nests well.

In the same experiments with the boobies above, the scientists also investigated the location of the nests and their eggs to investigate how well the egg camouflage works. In the diagram below, they have found that the probability of eggs being predated in the forest (more camouflaged) is lower than that of grasslands (less camouflaged).

With the simple choice of choosing the right location to build their nests, the survival of their eggs showed an increase of almost 40%! That’s amazing, isn’t it? Though this is the case for most birds, for largest birds and birds that nest in groups, they may instead choose to build their nests in the open as they are more capable of defending their eggs and hatchlings. Ground-nesting nightjars have a different tactic though: they use their absolutely cryptic and camouflaged feathers to hide their eggs.

Another example of how birds conceal their nests would be the case of the American Bittern. For those who don’t yet know, American Bitterns are birds that have brown and white stripes across its body. They often conceal their nests on the dry ground above water or in muddy areas that have thick vegetation. They often choose to build their nests with well-concealed reeds, sedges, and cattails. What’s interesting is that on top of that, they build different paths for their nest entrance and nest exit so that it is not easily accessed by other animals.

Other cavity-nester birds such as the Wood Duck use different methods to conceal their nests. The wood duck is a cavity nester and this means that they prefer to build their nests in cavities – this includes man-made birdhouses or decaying trees. The duck will choose cavities that are as high as possible and out of the reach of predators that cannot climb trees.

Now that you know how the birds can passively avoid detection and predation, let’s run through the immediate actions that birds can take in order to avoid being hunted.

A bird’s definite and predominant escape mechanism is simply flying away in retreat. Running away is an obvious reaction that we can all relate to. Given that most predators are not able to fly, birds are able to escape by flying to a higher vantage point and out of reach to escape death. For example, if a bird is hunted by a snake and if the bird senses danger, it may fly away and out of the strike range of a snake. In the process, the birds may alert other birds with alarm calls to warn other birds of the impending danger.

Now, it may be easier for a bird to escape from a land predator, what about escape from flying predators then? Birds use 2 methods to do so: (1) their in-air maneuverability and (2) flight speed.

In a study in the escape techniques forager birds use in escaping predators, experts have found that nearshore foragers use their speed to escape predation, whereas far shore foragers use their agility to do the same. The difference lies in their ability to independently decrease body mass and increase pectoral muscle mass to develop these attributes.

As seen in the picture above, Dunlins make use of extremely fast rotational banks to avoid capture by a Peregrine Falcon. By not flapping in flight, birds can use their muscle power instead to exploit lift forces to make turns.

Now that you’ve read this far, you might be amazed at how good birds are in avoiding their predators. It’s no wonder they have survived for so long and have SO MANY species around the world. If you’ve enjoyed this article then stick around for more interesting articles published on this blog. Thanks for reading and happy birding!