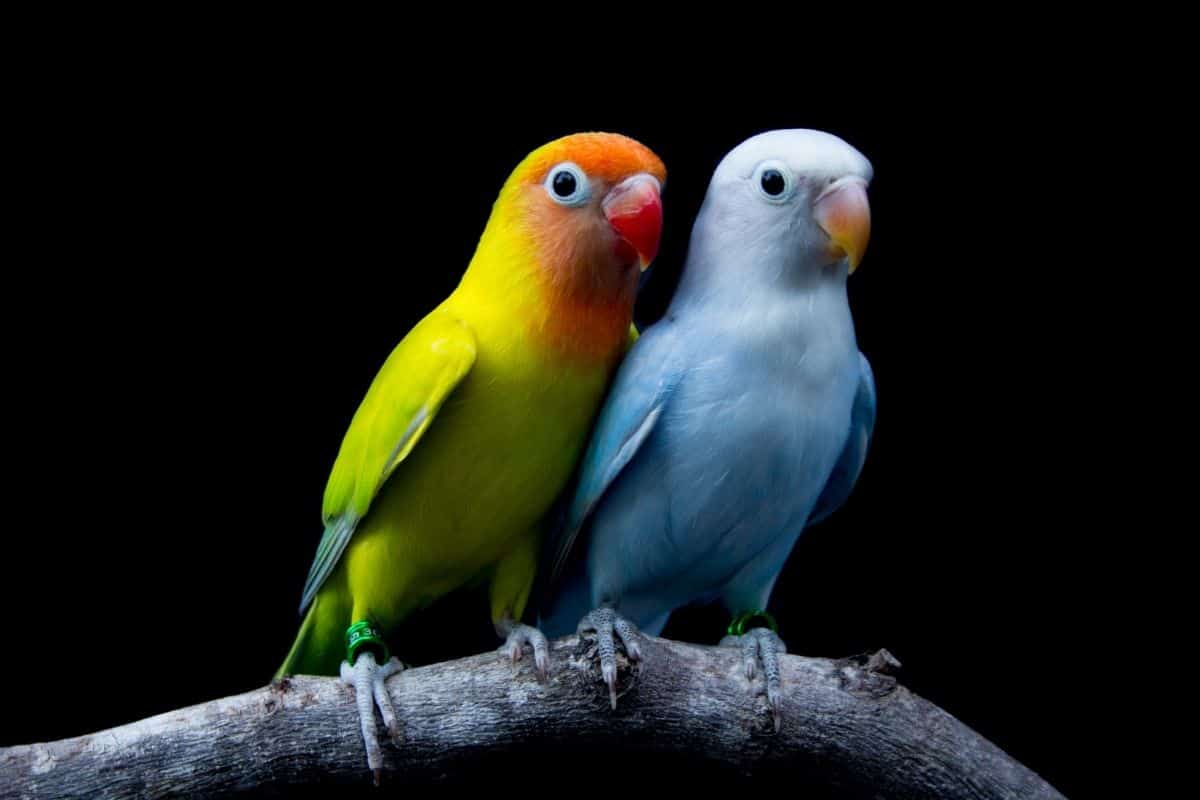 As I was really curious as to why they do this, I did my own online research and came up with a definitive answer!

Here’s what I found:

Love birds actually attack each other due to multiple reasons. If you read on in this article, I will cover more details on the reasons and more answers to FAQs that you may need to be answered. Let’s go!

Why Do Love Birds Attack Each Other? (Full Answer)

Chances are, if you’re reading this, then you’re probably really out of your wits because your lovebirds seem to be fighting non-stop. No worries, I’ll be helping you understand this behavior!

Here are 3 reasons why love birds attack each other:

Despite being tame for many years by humans, lovebirds still retain their territorial instincts, just like dogs that bark when neighbors walk past!

Here’s how bad it can get:

Birds in the wild typically will defend their territorial spaces using the birdsongs and sounds that they make. These warn other potential rivals to keep away from their spaces and their mates.

In the same way, your lovebirds may still maintain this behavior especially when they see another lovebird of the same gender.

Oh, chances are, your bird are likely to be throwing things around when they are feeling very territorial. I wrote an article on that behavior here. Do check it out as I go deep into the details behind it!

2) Your Paired Lovebirds Are Both Female

Okay, here’s the crucial part that many lovebird owners miss out on: Lovebirds are often mistaken between their genders because they look so similar!

Many pet shops just assume that a pair of birds are male and female without confirming it with their DNA.

Get this: A DNA test, known as an Avian DNA Sexing Test, is the only way you can tell a lovebird’s gender with high certainty. Guessing only leaves room for error!

Why is this so important? This is because lovebirds of the same gender are more territorial and will attack each other with more ferocity, and sometimes to the point of death.

This is particularly seen between two female lovebirds that have been mistaken for a male-female bonded pair for the longest time, only for their owners to find out they aren’t when they fight to the death when they hit sexual maturity.

This is known as being sexually monomorphic, this means male and female birds look the same!

And it’s also really easy to get your love birds/other pet birds tested for their sex these days. In fact, you can actually order an Avian DNA Sexing kit right from Amazon!

I really recommend that you get your bird’s DNA tested, either through this kit or other means!

In other cases, even when the lovebirds you have are DNA-confirmed to be a male-female bonded pair, they may still fight occasionally. This can purely be due to birds being highly territorial creatures, even within their own pair.

Think of it as some ‘space’ needed between partners in a relationship or marriage. Birds also need some ‘space’. Another possible reason is that when lovebirds successfully mate, they may be sensitive and become protective of their chicks.

Okay, other than early prevention, how can you stop the fighting between birds?

A simple and effective strategy that many bird owners from forums agree on would be this: Set up two separate cages to house each of the lovebirds in a pair but place them next to each other.

This allows them to communicate with each other, without any physical contact. This can prevent scratching, biting, and other aggressive behavior, allowing them some ‘space to breathe’ from each other.

Earlier I mentioned that love birds were very territorial. That’s actually because it’s a natural instinct to begin nesting behavior and protect their nest.

A bird’s environment can really affect how cranky birds can get. Let me give you an example. When given toys, paper, or even cardboard boxes to shred, love birds can get very consumed by their nesting instincts.

This is because paper shredding is associated with birds looking for items to use for their nest, a type of nesting behavior. This results in them being in a more feisty mood/temper that makes them more likely to bite other birds in their area or even humans.

Check out another article I wrote here about whether birds eat paper:

A love bird’s routines also plays a great part in its propensity to bite or fight.

Keeping a proper routine in feeding, playing, or uncaging your lovebirds is very important! Being late or missing a timing can cause birds to act up, as they may feel stressed by circumstances they cannot change.

If you’re wondering what kind of paper is suitable and safe for birds, check out another article I wrote here.

How Do I Know If My Lovebirds Are Fighting?

Lovebirds often fight by biting, nipping, and pecking at each other’s feet and beaks. Lovebirds usually fight when they are arguing over food, territory, or simply if they are aggressive to another bird of the same gender. Female lovebirds are more likely to fight with other female lovebirds than male lovebirds.

However, if lovebirds are gently approaching each other and rubbing their faces against each other, then they are not fighting.

Lovebirds also tend to do gentle nips with each other to show their affection. Knowing how to tell these apart takes practice!

If you’d like to learn about how to paint a cage for your bird and are wondering what kind of paint is safe for that, check out this awesome article I wrote that you need to read first!

Can Love Birds Kill Each Other?

Why Are My Lovebirds Biting Each Other’s Beaks?

How Long Does It Take For Lovebirds To Bond With A Human?

Lovebirds typically take about 6 months to a year to bond with a human. However, this duration can vary depending on the length and quality of time spent together in a favorable environment.

Why Does My Bird Bite My Mouth?

Birds like to bite human mouths and lips because of the following reasons:

Check out an article I wrote on the FULL details here!

Most birds like to pick at teeth due to these four main reasons:

Check out an article I wrote all about it here:

How Long Does It Take For Lovebirds To Bond?

A pair of lovebirds typically take 2 – 21 days to bond but can take up to a year to do so. The bonding duration of lovebirds depends on several factors such as having similar temperaments, how young they are first introduced to each other, and whether they are moderated well to prevent aggressive fighting.

Is It Normal For Lovebirds to Bite Each Other?

Can you Put 2 Male Lovebirds Together?

Two male lovebirds can be put together because males tend to be much less aggressive to each other than female lovebirds. However, the two male love birds must be introduced to each other gradually, from a young age, bonding in a common location, and eventually with a sufficiently-sized cage.

Can You Put 2 Female Lovebirds Together?

Can Lovebirds Hurt Each Other?

Can You Put Different Types of Lovebirds Together?

Different types of lovebirds can be put together in a common location to interact. However, the different lovebirds need to be separated in their own cages when they sleep as they are very territorial in nature. Female lovebirds are known to be more territorial and fight with each other more often than male lovebirds.

Can 2 Pairs Of Lovebirds Live Together?

Two pairs of lovebirds can live together in a common location for play but should be kept in separate cages when they sleep. Lovebirds can be very territorial and one pair may fight with lovebirds of the same gender in the other pair.

Can You Have 3 Lovebirds Together?

Three lovebirds can live together in a common location for play but should be kept in separate cages when they sleep. Lovebirds can be very territorial and may fight with lovebirds of the same gender. Male lovebirds are more tolerant of living together than female ones because they are less aggressive.

Can I put 4 Lovebirds Together?

Four lovebirds can live together in a common location for play but should be kept in separate cages when they sleep. Lovebirds can be very territorial and one pair may fight with lovebirds of the same gender in the other pair. Male lovebirds may be more tolerant to living together in a group of 4.

Can You Tame A Pair of Lovebirds?

A pair of lovebirds can be tamed over time and can take up to 6 months to a year to bond with humans. Lovebirds need to receive extra care and quality time over long periods before they trust and show affection to their owners.

Two male lovebirds do fight if they are quarreling over food, space, or territory. However, male lovebirds are less territorial so they fight with much less aggression and less frequency than female lovebirds.

Why Are My Male and Female Lovebirds Fighting?

Male and female lovebirds can fight due to a number of reasons: (1) Food, (2) Territorial Space, (3) Defending Chicks, and (4) when the bonded pair is not DNA-confirmed to be a male-female pair. Owners often mistake their female-female pairs to be male-female, leading to aggressive fighting.

Are My Lovebirds Playing or Fighting?

Why Do Lovebirds Bite Each Other’s Feet?

How Do You Stop A Female Lovebird From Biting?

You can stop female lovebirds from biting by not intruding into their territorial space during their breeding season. Other ways include speaking softly, removing items that cause nesting behavior, creating a soothing environment for the bird, and learning how to read a bird’s body language.

If you want to learn more, I encourage you to read this super great resource I found online. The site covers the different hormonal behaviors that a bird can go through and how to read its body language. Do check it out!

So now you know a lot about lovebirds and how they often fight each other. Hopefully, you would have learned a lot from reading this article.

I had fun and learned a lot from researching for this article!

Thanks for reading and happy birding!!

I became fascinated with birds and birding in 2019 and have loved every second of it since! I strive to share any helpful information on birds with everyone.